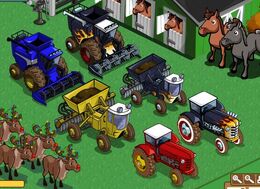 Vehicles are tools used by some farmers to aid them while farming. Vehicles are used to make tasks easier for farmers by completing the task multiple times. For example, the tractor will plow all fallow plots in a 2x2 area with one click.

Using a vehicle costs fuel and when a vehicles runs out of fuel, it cannot be used. Fuel regenerates slowly over time, can be won in a Mystery Gift, can be shared by neighbors, can be bought for FarmVille cash from the market, and can be acquired from other sources.

When a Garage is fully built, and after Level 26 has been reached, the farmer can upgrade a vehicle, by using Vehicle Parts, to operate on a maximum of 4x4 (16 plots) plot area. The Hot Rod Harvester, Hot Rod Tractor, Hot Rod Seeder, and the School Bus Plow operate on a 3x3 plot area (9 plots) with each use.

For the St. Patrick's Day Event, three additional vehicles were released - Lucky Tractor, Lucky Seeder and Lucky Harvester. The School Bus Plow is available as a reward from Co-Op Farming. This new vehicle plows an area of 3x3.

With the introduction of the Garage all functional vehicles can be upgraded in stages up to a maximum of a 4x4 area.

With the introduction of the Combine all three tasks can be done at one time (harvesting, plowing, and seeding). Note that fuel costs remain the same as if you performed the functions by hand, or used the other vehicles: Using a Combine on a 2x2 plot area will still require the same 12 fuel as if you had harvested, plowed and seeded those 4 plots manually. As mentioned above, using the Combine will not affect experience earned.

Retrieved from "https://farmville.fandom.com/wiki/Vehicle?oldid=450108"
Community content is available under CC-BY-SA unless otherwise noted.