FarmVille Wiki
Register
Don't have an account?
Sign In
Advertisement
in: Event, Event no longer available, Events by start date,
and 3 more

Items released during this event

In addition to the themed items the Romantic Carriage was also released as a part of this event. This craftable building produced Love Arrows which could be traded for exclusive Valentine's Day themed items.

New for this event was the Tunnel Of Love, a feature designed similarly to the Penguin Escapade. The farmer would ask neighbors to help three pairs of animals take a ride through the tunnel. After each pair has been helped they will reward the farmer with a baby offspring. 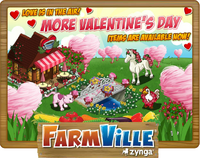