This item cannot be stored.

The Unwither Ring is a limited edition gift created as part of the Valentine's Day Event. It costs 250

cash and protects the owner's crops from ever withering again. This is a permanent ability that the farmer will never lose. The ring is available for gifting between the February 9 and February 14, 2010; in a Red ring box. It was re-released between June 24 and July 2, 2010; in a Blue ring box. It was re-released for a third time between November 29 and December 5, 2010 as part of the Winter Holiday Event (2010), and again for the fourth time between January 28 and February 14, 2011 as part of the Valentine's Day Event (2011). These can only be placed on the Home Farm and does not prevent withering on the English Farm. Furthermore if an Unwither Ring is deleted from a farm the farm does not lose the power of the ring, i.e. crops still do not wither.

The ring is customizable with either a Gold or Platinum band, and the choice of one of the following stones: Diamond, Pink Diamond, Sapphire, Ruby or, no stone (plain band). A personal message can be written that accompanies the ring in a box that is gifted to a neighbor of the farmer's choice. The ring box can be placed on the recipients farm but it cannot be opened until February 14.

During the Valentine's Day Event, the ring could only be received as a gift. However, during the re-release, players were able to purchase the ring for themselves. The price of the ring makes it the second most expensive item ever released on FarmVille (50 farm cash less than the Platnium Mastery Statue) and one of the few items truly impossible to purchase without buying FarmVille Cash, unless you get a lot of farm cash through the

The Unwither Ring for the Home Farm was re-released on the November 30th, 2011 as part of the Winter Holiday Event (2011), available from the market for

The Unwither Ring for the Lighthouse Cove was re-released on the November 30th, 2011 as part of the Winter Holiday Event (2011), available from the market for

The Unwither Ring for the Winter Wonderland was released on the December 9th, 2011 as part of the Winter Holiday Event (2011), available from the market for

Unwither Ring available for the Hawaiian Paradise (farm), on the March 4th, 2012 for a limited time for

cash. Also, for on a limited time sale for 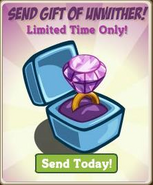 UNWITHER RING IN AN FARM