Super Pumpkins was a temporary Crop available to farmers who were fans of the FarmVille Fan Page on Facebook. The crop was originally slated to be available until February 2, 2010. This date, however, was pushed back to January 29 before being changed to the final time of 9:00 PM PST Sunday, January 31. They were offered as a reward for FarmVille hitting 15,000,000 fans. It was the first temporary crop that could be Mastered. Before 28 January 2010, the sprite for a fully grown Super Pumpkin depicted one large pumpkin filling the entire square. This was changed to be four larger than normal pumpkins, with the fertilized sprite remaining the gigantic pumpkin. 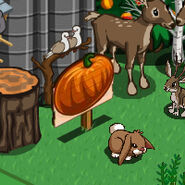 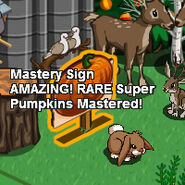 A farm of Super Pumpkins.

Retrieved from "https://farmville.fandom.com/wiki/Super_Pumpkins?oldid=449104"
Community content is available under CC-BY-SA unless otherwise noted.