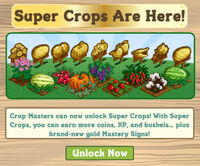 All Super Crops can be planted on ALL available farms (like limited time crops), even if you do not have license for basic crop!

Please note: Super Crops only grant bushels for the basic version of the crop. This means that if I harvest Super Strawberries and find a bushel, it will be a normal Strawberry bushel, not a Super Strawberry Bushel. Because of this, you cannot use bushels on Super Crops to gain a Mastery Bonus.

Unreleased Super Crops
Add a photo to this gallery
Retrieved from "https://farmville.fandom.com/wiki/Super_Crop?oldid=486538"
Community content is available under CC-BY-SA unless otherwise noted.