Snow Carnation seeds are a crop in FarmVille. It was originally released on January 2nd, 2012 as part of Winter Fantasy Event (2012) and was available until January 29th, 2012. It costs

40 coins to plant and gives

2 experience when plated. It takes 12 hours to grow and can be harvested for

It was re-released as permanent crop on December 19th, 2012 as needed crop for execution Ice Sculpture Quest that was added as un-timed quest. 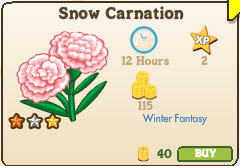 Retrieved from "https://farmville.fandom.com/wiki/Snow_Carnation?oldid=425890"
Community content is available under CC-BY-SA unless otherwise noted.