Profit
per hour
per square
(on farm)

Note: Not to be confused with previously released items Dragon, Spring Dragon or Chinese Dragon.

The Red Chinese Dragon was re-released as part of the Dragon Lair. It could now be bought from the Market for

24 cash and giving you 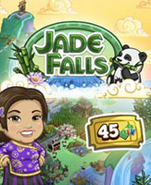 Retrieved from "https://farmville.fandom.com/wiki/Red_Chinese_Dragon?oldid=423966"
Community content is available under CC-BY-SA unless otherwise noted.