The Pigpen is a storage Building which was released on August 26, 2010. It was slowly released to all users during the day as a gift. It requires 8 Wooden Boards, 8 Nails, and 8 Bricks to build.

You can have a maximum of 1 Pigpen on 1 farm, and it can be harvested every day for Truffles.

The Pigpen is not animated in the iPhone version. Even if its full it looks like the empty version. However when you harvest it will count with all of the pigs you have inside.

On September 3, 2010, Stage 2 of the pigpen was released: Truffle Hunting.
Elsewhere in this Wikia you can find the complete Guide:Truffle Hunting. Pigs in pigpen can be sent out to hunt for truffles. After hunting, a pig will be tired out and need to sleep for 2 days before they can hunt again. If the hunting pig is successful, they will find a Truffle that is sent to one of player's neighbors. You can't use the truffles your hunting pig found unless you send it to your neighbor and they send one back.

Slop was previously needed to send pigs out hunting. However, it is no longer used. A hunting pig consumed 1 Slop. Slop could be made by using Bushels on the Pigpen.

This option was canceled on April 23rd 2011, and a new option of random truffle hunting on harvest along with breeding pigs was released. Since this day, a Truffle can only be obtained when you harvest your Pigpen. (see more below)

The following Truffles are available:

Just hours after originally being released, there was a game-wide rollback, after which the Truffle Hunting was gone (disabled). It is assumed it was due to massive bugs related to finding truffles on a 'null' farm. It is unknown whether these 'null' farms were just a bug, or previous users who have left FarmVille and blocked the application, but when you found a truffle on a null farm, you were unable to post to a user wall to eventually get the truffle back. Approximately 50% of all truffle finds were on 'null' farms, leading to users wasting their slop, and cool-down on their pigs. After a day the Truffle Hunting was re-released.

Different types of pigs that can be placed into a Pigpen:

On April 23rd, 2011, FarmVille officially announced the option to Breed Pigs in the Pigpen. A new Pigpen was given to all farmers to construct and when completed, a player will receive a Green Boar in their Gift Box to begin breeding.

Breeding works exactly like the Sheep Pen: When successful, breeding a Sow and a Boar will produce a Piglet , which has to be fed with 10 Bottles. To increase the chances, a player could use 1-5 Love Potions.

With this improvement, the Truffle Hunting feature was modified and players could only find a truffle when harvesting their Pigpen. The remaining slop on the pigpen could be traded in for Love Potions (1 slop = 1 Love Potion) and now a Pig can find Truffles without needing slop. 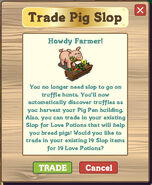 Retrieved from "https://farmville.fandom.com/wiki/Pigpen?oldid=494954"
Community content is available under CC-BY-SA unless otherwise noted.