The New Year Party Barn is a constructible, limited edition, building in FarmVille.

Once the New Year's Ball is on the farm you can click on it, then select “Look Inside” to see this window:

New Year's Ball comes with one brick. It requires 8 each of Bricks, Nails, and Wooden Boards to be completed.

When it is on its finally stage it will glow up.

Once the players access their farm, they were immediately entered into Placement Mode. The New Year's Ball could be placed on the farm then, or the player could choose to place it in the Gift Box for use later.

If player wind up selling their New Year's Ball for some reason, they can purchase a new one in the Market for 5,000 coins.

On its release, the New Year's ball received many issues including not being able to send invites to your FarmVille neighbors. Currently this has not received any workaround. However, the other issue, which doesn't allow you to "Go to Party!" and receive the pop-up box, has a possible workaround. Simply store your New Year's Ball in your Storage Cellar for 1 day. Afterwards, place it somewhere else in your barn, not in where you previously placed it. Your Ball will be working then! Note: This does not work for all farmers.

In order to have a party in your Party Barn, friends need to be invited. As friends accept the party invitation, the host unlocks special rewards from the table shown below. 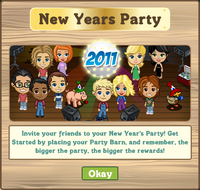 Retrieved from "https://farmville.fandom.com/wiki/New_Year_Party_Barn?oldid=496521"
Community content is available under CC-BY-SA unless otherwise noted.