Lighthouse Cove is an extension of FarmVille and is the 3rd Farm, excluding the expansion farms and mini farms. You needed to be at experience level 15 or above to use this farm. This farm uses the 12x12 expansion system.

It was first mentioned in FarmVille on August 31st, 2011. Later, on September 12th, 2011 it was introduced with early access for

55 cash. It was released to all players for free on September 19th, 2011 by offering a free boat ticket.

On November 14, 2011; access to this farm was removed to any player that had not visited the farm at least one (1) time prior to this date.

On December 14, 2012; access to this farm was, again, available to this farm in order to complete the new Welcome Back to Lighthouse Cove Quest until January 14, 2013; when the farm access was again removed from any player who had not visited their farm at least one (1) time during this time frame.

On October 1, 2013; Zynga made all farms including this one accessible to all players, even if you have not performed any of the required quests and never have visited this farm before. You needed to be at experience level 15 or above to access this farm.

On January 31, 2012 Zynga release license to seed Lighthouse Cove crops on other farms and to transfer items between farms via Storage Cellar. This license was cash only. Next to that was a version with a greyed out buy button and when you moved a cursor over it, writing that it's "coming soon" and that one of the conditions is that the Lighthouse Cove should be upgraded to level 10.

On March 23, 2012, during the Player Appreciation Week Event (2012), all players are offered a free shipping license for upgrading the Lighthouse Cove to level 10, and should the player already have the Lighthouse Cove at level 10 then the player is required to harvest and may required to use the 'Look Inside' option to trigger the Pop Up notification. When the player has met the requirements, the shipping license will be found in the Gift Box. 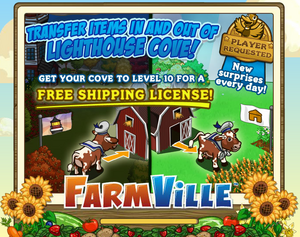 Retrieved from "https://farmville.fandom.com/wiki/Lighthouse_Cove_(farm)?oldid=516615"
Community content is available under CC-BY-SA unless otherwise noted.