The FarmVille Mobile App was released to Apple's App Store on June 23, 2010, as a free download. It was withdrawn from the iTunes marketplace, and is no longer available. It required that the user already have a Facebook account. The app brought new items to the game that could be purchased or gifted only on the iPhone, iPod Touch and iPad. Users were also able to purchase Farmville Cash and Farm Coins as In-App purchases through the iTunes App Store provided by Apple.

The gameplay was severely limited compared to FarmVille Web, and only supported basic actions such as planting, harvesting, and using the Biplane. Co-Ops and other "advanced" features were not supported. 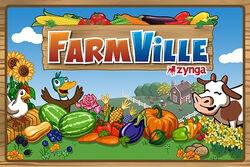