Start a Wiki
For other forms of currency, see Currency.

cash (also known as FarmVille Cash, FarmVille Dollars, FarmVille Bucks, Farm Cash) is currency used to purchase in game items and skip tasks. It can be purchased with real-world money, and will also be slowly given to a player over time when reaching higher levels.

A player will receive 1 FarmVille dollar whenever they increase a level. At the beginning of the game, a player has 5 FarmVille dollars. Because of the relatively slow flow of cash from levels, this is not a very effective way of earning FarmVille Cash.

Zynga has also released Farm Cash cards, exclusive to the U.S. Farmers who do not wish to or are unable to pay online can buy Farm Cash cards, which they can use to exchange for Farm Cash. They are currently available in $10, $20 and $50 amounts. Farm Cash cards were then released in the U.K (and still are) and currently sell them up to £10 , £25 and £50

There are four ways to get the 1 FV cash gift:

A 20% OFF on FV Cash took place between December 24 and December 26, 2010. This promotion was applied on Farmers who purchased Zynga Game Card during the promotion period.

Another promotion took place between January 02 and January 31, 2011. Promotion was to buy a Game Card from Best Buy to receive a mystery box with your redemption.

Another promotion took place between January 31 and February 03, 2011. Promotion was to purchase a Farm Cash or coins to receive an Alpine Goat with your redemption.

40-55 cash) required a short quiz or survey to be completed and for a cell phone number to be provided. You would then receive a text message with a pin number that had to be entered on the FarmVille website. If you enter the pin you will be charged $9.99 a month for absolutely nothing (besides the

40-55 cash you receive one time). It is not advised to use this method of obtaining FarmVille

In some cases, FarmVille dollars are not awarded when they should be. If that happens, the player must contact Double Ding - the company Zynga uses to provide the 3rd party surveys. Double Ding would then communicate with the company you completed a survey for. This is not always reliable and could take a long period of time.

How these methods were stopped Edit

Facebook had concerns about spam going on, and some offers were actually fake subscriptions, causing problems from users. Finally, offers were no longer in use in FarmVille. 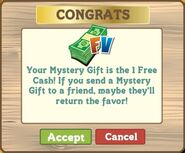 1 FV Cash in the Gift Box

Notification if you have already received the April Farm Cash Bonus

Retrieved from "https://farmville.fandom.com/wiki/FarmVille_Cash?oldid=517705"
Community content is available under CC-BY-SA unless otherwise noted.