On April 2, 2010, Co-Op Farming was introduced to FarmVille.

At least level 21 was needed to access Co-op Farming. If a farmer was below that level and tried to join the co-op, they would be compensated with 20 experience.

To get to the Co-Op menu, a farmer had to click the icon at the bottom right of the screen. There, an overview of all available jobs could be found. A farmer could only work at one job at a time. Each job could be done in three time spans, the quicker it was completed, the better the reward would be. The Gold Medal was best, followed by silver, with bronze last.

FarmVille would post jobs in the co-op menu for farmers and then farmers could select a job. They could ask for help from neighbors to be able to finish the job more quickly.

In the Jobs window, a farmer could make a choice of All Jobs , Crafting Jobs or Basic Jobs.

In the Active Job window, (only accessible when you were currently participating in a Co-Op Job) a farmer could see all data related to the current Job:

The Job History gives an overview of jobs you have taken part in. 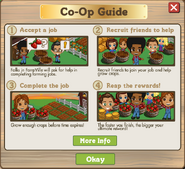 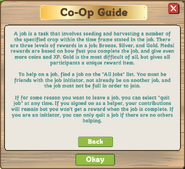 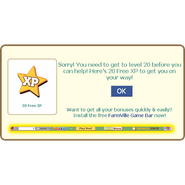 Message for below level 20 farmers.

New Ribbons were also released with that feature:

There have been some issues with the release of this feature as some players are reporting trouble viewing and/or creating jobs.