The Chicken Coop is a building available on FarmVille. A farmer may put up to 100 chickens in a chicken coop so that they may be harvested all at once (similar to a Dairy Farm).

During 2010, there was a glitch that allowed players to have more then 1 chicken coop on each farm. Later, Zynga removed all those secondary chicken coops and left only 1 coop per farm. On August 31st, 2012 they changed it so that players could to have up to 2 chicken coops per farm.

If a farmer clicks Look Inside on a chicken coop, they will be shown information about the animals inside including: what type of animal and how many, the type and cost of the eggs produced, and when they can be harvested. 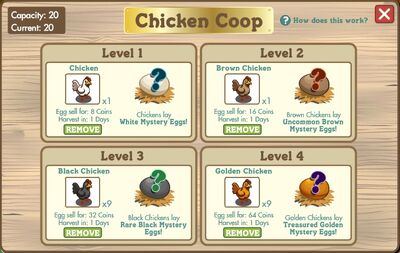 Certain animals can be stored and harvested when placed in the Chicken Coop. When harvested, these animals produce mystery eggs.

If a farmer does not own a certain kind of animal that can be stored in the Chicken Coop, the box will appear gray, as for the Gold and Black chickens shown below:

There is a chance of obtaining a Mystery Egg with each harvest of the coop. The color of the Mystery Egg that may be produced is determined by colors of the chickens in the coop; having more of a particular chicken in the coop will result in a higher chance of finding that chicken's egg. If a Mystery Egg is not found while harvesting from the Chicken Coop, the user receives a bonus from 2 to 5 times the value of the eggs harvested directly from the chickens.

The feature of feeding your neighbor's chicken coops was introduced on 6 January 2010.

A Chicken Coop initially can hold up to 20 Chickens.

A farmer can expand the Chicken Coop either by paying

1 cash per person required, or asking neighbors for help. If the farmer chooses "Ask for Help", he has 3 days to get 10 neighbors have to click on the Newsfeed. A neighbor can only help 1 time per day. The farmer can see how many (but not which) neighbors helped. Farmers can cancel or pay to complete the expansion at any time.

Retrieved from "https://farmville.fandom.com/wiki/Chicken_Coop?oldid=430582"
Community content is available under CC-BY-SA unless otherwise noted.