The CastleVille Unwither is a consumable that was introduced as part of the Zynga's CastleVille Promotion Event. Unwither lets a farmer restore all withered crops on a farm.

CastleVille is Zynga's latest game and as a reward for trying it out to level 5, they reward the players with 5 free CastleVille Instant Grows. There was a CastleVille billboard on the outskirt of the farm located at the bottom, a simple click on "Play Now" for quick access.

Zynga offers these promotions as an incentive for FarmVille players to play one of their other Zynga games. It was released on the December 6, 2011, when the player attains the required level 10 in CastleVille, you can find the 5 CastleVille Unwither and 10 CastleVille Unwither in the gift box. Prizes will not be granted until December 19, 2011. 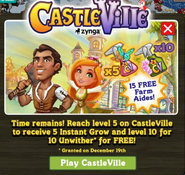 Notification
Add a photo to this gallery

Retrieved from "https://farmville.fandom.com/wiki/CastleVille_Unwither?oldid=517680"
Community content is available under CC-BY-SA unless otherwise noted.