CastleVille is Zynga's latest game and as a reward for trying it out to level 5, they reward the players with 5 free CastleVille Instant Grows. There was a CastleVille billboard on the outskirt of the farm located at the bottom, a simple click on "Play Now" for quick access.

Zynga offers these promotions as an incentive for FarmVille players to play one of their other Zynga games. It was re-released on the December 6, 2011, when the player attains the required level 10 in CastleVille, you can find the 5 x CastleVille Instant Grow and 10 x CastleVille Unwither in the gift box. Prizes will not be granted until December 19, 2011. 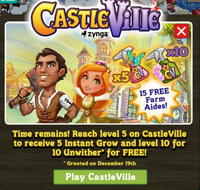 Retrieved from "https://farmville.fandom.com/wiki/CastleVille_Instant_Grow?oldid=517678"
Community content is available under CC-BY-SA unless otherwise noted.