Profit
per hour
per square
(on farm)

The Camargue Horse is a animal available on FarmVille.

They were re-released on June 17th, 2011, as part of the Birthday Event (2011). It could be obtain randomly by purchasing the German Theme Mystery Animal Crate for 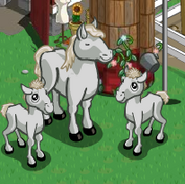 Retrieved from "https://farmville.fandom.com/wiki/Camargue_Horse?oldid=512513"
Community content is available under CC-BY-SA unless otherwise noted.