The Boomerang is a limited edition seed in FarmVille and was released as part of the Australia Event; they require a licence to plant. It was released in the market on August 9th, 2012 and was available until September 6th, 2012; a total of 28 days.

It was re-released on April 18th, 2013 as permanent item as part of Australia (farm). A license for Boomerangs could be bought for

4 cash. After buying the license they cost

45 coins per plot and could be harvested for 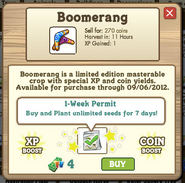 Retrieved from "https://farmville.fandom.com/wiki/Boomerang?oldid=516592"
Community content is available under CC-BY-SA unless otherwise noted.