Items released during this event

The Birthday Event (2011) celebrates the second birthday of FarmVille. The event started on June 7, 2011. Similar to previous events, there was a Birthday Countdown! in which you could collect twelve prizes by asking your neighbors for them in order to receive a special reward.

A series of birthday related goals was released during the event, starting with the goal Happy Birthday to FarmVille.

As with the Spring Countdown!, the Birthday Countdown consists of collecting 12 daily prizes to gain a special prize. 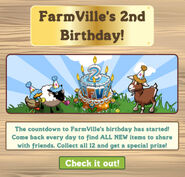 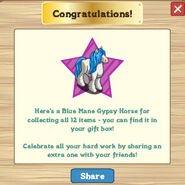 New items were released during the event.

FarmVille released 3 quests for this event. They are:

The rewards for completing these quests were, by order, a Birthday Gnome, a Mini Party Horse and a Birthday Trophy.

The FarmVille Birthday Classics is a subset of the Birthday Event which, daily, presented different themes and events. The theme is only available for 1 day (24 hours) until another theme is presented. Basically it was like the 7 Days of Summer Event.

Along with this event, FarmVille made some special mystery items to players.

Retrieved from "https://farmville.fandom.com/wiki/Birthday_Event_(2011)?oldid=502661"
Community content is available under CC-BY-SA unless otherwise noted.